Mum has lost the ability to swallow

Hi,just joined my mum has had dementia for many years has been in a care home for the last 5 years. 7days ago lost the ability to swallow. Finding this really hard to cope with,she has had no food or fluids since due to risk of choking she is been kept comfortable by regular morphine injections. She is just slipping away before my eyes .the staff in the home have been great with support of our local hospice.but it just seems so cruel they assure me she is not suffering but how long can you go on with no fluids.

My Mum is also going through this now Lottiemoll. One of my friends is a specialist dementia nurse and she has assured me that there is no pain for the patient. They are given morphine and sedatives so that they can have a peaceful end. Certainly seeing my Mum today she is barely conscious. I don't know how long death will take as a lot depends on the physical health of the person (and apart from dementia my Mum had no health problems). We just have to be strong and let nature takes it course {{{Lottiemoll}}}.
L

Thanks,really hard to think this is the end ,have been living with mums dementia for years. Not sure how I expected mum to go but did not think it would be like this . Feel so useless unable to do anything just to sit and watch her it’s been 9 very long days ,she has just been fitted with syringe driver today hopefully will make her more comfortable.

It varies considerably..dad was 14 days non food and 7 days without fluids before end of life another resident 3 weeks which seems quite remarkable. However just take one day at a time good that she is being kept pain free and comfortable and try and get rest yourself. Your mum will be comforted that you are there when you can be and I wish you and Risa strength
In the days ahead.

Everyone is different @Lottiemoll My mum went 17 days without food or fluid, but she was resisting it all the way.
Once they are on a syringe driver it is only a matter of a few days max.
It is a hard time and you feel like you are in a twilight world.
Hearing is the last thing to go, so even if she cant respond she will still be able to hear.
Play her favourite music and talk or read to her. You can get little sponges or brushes to keep her mouth moist and you can put moisturiser on her skin and lip salve on her lips to keep her comfortable as she will be very dry.
You will find that her limbs become very cold, her eyes become opaque and her breathing will change with long gaps between breaths. Do not be frightened by this - it is part of the natural process.
((((hugs)))))
L

Really difficult day , sat with mum all day today on 10th day no fluids been on syringe driver since Monday,her breathing is steady but slow .she is keeping going just sleeping the waiting is so hard not sure do I go to work do I stay with her it's so difficult .i know she is been cared for and looked after by wonderful care staff but the guilt of not been with her is tearing me apart .

Don't feel guilty Lottiemoll. I am also struggling with trying to work and visiting Mum/not knowing how long she has left. I just make sure that every time I visit, I say to her the things I want her to know so that if she passes when I am not there, nothing has been left unsaid.
B

My thoughts and prayers to both off you at this final journey..you are both in my prayers ..hugs.xxx
B

Lottiemoll and Risa thinking of you both

Mum passed away yesterday, she was very calm and peaceful. I had been very frightened of the moment she passed , but in the end we were listening to music it was all very calm the home staff were wonderful and gave us time and space to say goodbye.
T 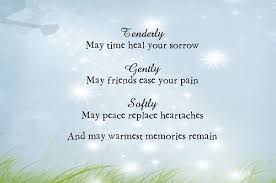 Sorry for your loss Lottiemoll; glad that your mum's passing was peaceful and hope this gives you some comfort in the difficult days and weeks ahead. Xx

This is so beautiful. Hope you don't mind but I'm going to repost on another thread for someone who's just lost his wife.

((((hugs)))) @Lottiemoll
I am amazed that your mum went so long, but glad that she is now at peace.
Be gentle with yourself.

Hi,
It's some comfort to know that others have or are experiencing what we are currently going through.
I cant tell you how heartbroken and sad I am that my Mum's journey is ending like this.
She is in a wonderful care home and on Tues this week they called the GP as Mum was continuing to hold food and liquid in her mouth and the risk of choking was increasing. The GP said that they were to withhold all fluids etc this included her meds because of the risk of choking.
I m trying to find some comfort in this horrible situation.
Reading your posts has helped. I just wish I could make things better.
I used to tell my Mum everything is fixable...this isn't xxxxx
B

Hi josiejo..i am same with my mum...heartbreaking is beyond words...cruelist disease i have known!! Hopes and prayers your mum isnt in pain.xxxx

Baby Bunty said:
Hi josiejo..i am same with my mum...heartbreaking is beyond words...cruelist disease i have known!! Hopes and prayers your mum isnt in pain.xxxx
Click to expand...

Hi, thank you for your reply..I hope also that your Mum is comfortable and pain free...it is such a horrible disease. I wouldn't wish what my Mum has been through on anyone...sending you my warmest wishes xx
F

Josiejo said:
Hi,
It's some comfort to know that others have or are experiencing what we are currently going through.
I cant tell you how heartbroken and sad I am that my Mum's journey is ending like this.
She is in a wonderful care home and on Tues this week they called the GP as Mum was continuing to hold food and liquid in her mouth and the risk of choking was increasing. The GP said that they were to withhold all fluids etc this included her meds because of the risk of choking.
I m trying to find some comfort in this horrible situation.
Reading your posts has helped. I just wish I could make things better.
I used to tell my Mum everything is fixable...this isn't xxxxx
Click to expand...

Hi
My mum met the same end just over 3 weeks ago. It's hideous. I don't know what to say except it helped when I read that by that point, mum's brain was no longer registering or experiencing hunger/thirst. I ended up pleading with her to go and end her suffering. I gave mouth care and just sat with her. It's miserable I know. Just know you're not alone.
E

So sorry to read about your Mum @Lottiemoll

I've rejoined this forum after a few years as my Mum has early onset dementia, she's only 59 and in late stage. She went into hospital on 1st May from her absolutely fantastic home where she has a supported flat. She'd been unwell since about mid April when the GP visited and said she had a virus, so gave antibiotics. Her chest was clear and no cough. But she didn't seem to pick up again and appetite was variable, same with drink. She's on a pureed diet and has always had a good appetite but she started holding food in mouth and spitting it out. Then one evening she was being helped to bed and carer tested pulse and oxygen, her saturation vwas dropping and pulse heading to 150bpm. They called an ambulance and we dashed there from over an hour away, I've never seen her look so sick, turns out it was aspiration pneumonia (again). They didn't think she'd last the night. But she did, and has been given excellent care in hospital with strong antibiotics, paracetamol as needed, was on ventilator for first few days, weaned off now.

But she's been having seizures, which they'd suspected at her home. She had three seizures last night, and sodium valporate has been increased.

She's also had a nasal feeding tube in place as she was too poorly to eat. Speech and language therapist seeing her every day, but I was there on Friday and they say my Mum has a weak swallow but not enough to start usual diet again. I'm worried about what will happen next, I don't think my Mum would want a PEG tube fitted and for quality of life I hope she can continue to eat. But what if she can't take in enough nutrition by mouth? I just don't know what to do. I know in the early years of the denentde starting she was in a different hospital and trying to stuff tissues in her mouth or putting a bag over her head ssyins she wanted to die. But the place I got her in to is fantastic and she's been content there, it's the best things can be considering. I wish we'd talked about what she would want before it got to know, when she can't tell me what to do for the best.

I'm an only child (albeit 37) with no other living relatives, so it is hardgoing. My poor Mum is in hospital over an hour away from where I live, and is whinging seeming distressed when I've been there the three times this week. My work have been very supportive but I work f/t and am struggling. I want to be at the hospital to quiz Doctors and to get her home once she's well enough. I've been fighting for my Mum since 2011 when she was diagosed with early onset, and she moved to the great place in 2012.

It's all so sad. She was such an independent woman who brought me up as a single parent, with help from my Grandad. It wasn't all plain sailing by any means, but she's my Mum and I want what's best for her. Crying now as feel so sorry for her, for this situation, and if I guess the best move and it's not what she'd want.
You must log in or register to reply here.
Share:
Facebook Twitter Reddit Pinterest Tumblr WhatsApp Email Share Link
Unanswered Threads