Carmenjane said:
The person I spoke to warned me that I might get a letter from a debt collection agency because this happened automatically when a direct debit was stopped, but to ignore it.
Click to expand...

Be prepared to argue, Vodafone may have sold the debt to the agency which then may start with strong arm tactics.
M

Carmenjane said:
I have just been through a maze with Vodafone. I firstly phoned the number they advertised as being to do with PoA. I had obtained a code which they took down and accepted. But then I was told that dementia is not a "critical illness" and therefore they would not cancel his contract, it would automatically expire if the phone wasn't used for three months. I argued, to no avail. Next I tried the on line chat who couldn't do anything about it but gave me another phone number to the critical illness team. That person was shocked at what I had been told and said that the contract would be cancelled and that I could stop the direct debit, which I did.

Then I got an email from the critical illness team saying that they could not trace the contract and it must be an anonymous pay as you go. I phoned the previous number again and this time the whole mess was sorted out. They had got the number wrong, and I know I didn't tell them wrong because this was our only mobile phone for 20 years and I can just rattle it off. The person I spoke to warned me that I might get a letter from a debt collection agency because this happened automatically when a direct debit was stopped, but to ignore it. I find this shocking - do they not even try to find out why the DD was cancelled first? It could have been a mistake/inability to pay/anything. My own phone is on a Vodafone contract but I will be switching as soon as it ends.
Click to expand...

As always:
If you want to argue better
Always stop to write a letter
W

Cinnamon009 said:
I have an activated POA for my mum who has alzheimers. Halifax were really great and I managed to get access to the finances pretty quickly. However, everything else is proving really tricky.

Her British Gas bill has trebled but we have no paper bills or anything which shows their usage. They have an old email address on their records which she no longer has access to (google email are pretty much locked down if you can't remember your password or any of the security question answers.) Because of this and the fact that my mum couldn't answer their offshore call centre questions they refused to deal with us. I have tried sending in the POA by post the complaints team but still no access.

Virgin Media pretty much the same thing. Their TV packages is costing £150 per month and they only watch free channels and again, they are refusing access to anything because mum cannot answer questions from when she set up the account ten years ago. Again they are refusing to even discuss the POA unless Mum can answer those questions.

I have no idea where to go next with these companies. I am submitted complaints to both of them in writing but nothing seems to happen. In the meantime my parents are financially in a difficult position due to the proportion of their pension these payments represent. They only have state pension plus a tiny amount of private pension to live on. Where can I go to to get help?
Click to expand...

MartinWL said:
This seems strange, nearly all big firms are used to POA situations. How would your mother be involved and asked questions? Normally the attorney submits the registered poa copy, the PWD would not be asked questions. If they need the PWD to answer security questions there must be some reason why these companies don't accept the poa. Has it been registered with the office of the Public Guardian? My guess is that there's a piece of the jigsaw missing.
Click to expand...

The LPA is registered and activated. I telephoned Virgin when I found out how much they were being charged and asked who I send the LPA to and if they can use the online code instead as I had with Halifax so i can sort out their package. Wouldn't even give me an address to send the LPA to unless Mum could answer security so all i could do was send it in with a complaint. Not heard a peep since. Telephone twice since to chase the complaint and just met with same response. Wont engage at all unless Mum can give security andwers. My mum is very reliant on the TV so no way I can cancel the direct debit however tempting it is. So at the point I called them they didn't have the LPA as nothing online about where to send it. They haven't asked any questions about the LPA they are just ignoring it. I'm met with a wall of silence.

Cinnamon009 said:
Wouldn't even give me an address to send the LPA to unless Mum could answer security so all i could do was send it in with a complaint
Click to expand...

Ask how you can set up your own access to your mum's account so you can amend package as required, also ask that any early cancellation charges are waived.
C

Ask how you can set up your own access to your mum's account so you can amend package as required, also ask that any early cancellation charges are waived.
Click to expand...

That's the same address for complaints so its the address I sent a copy of the LPA to with my complaint about 8 weeks ago. Not heard anything back.

Cinnamon009 said:
That's the same address for complaints so its the address I sent a copy of the LPA to with my complaint about 8 weeks ago. Not heard anything back.
Click to expand...

Your letter will be acknowledged within 48 hours of receipt and we aim to resolve all written complaints within 28 days once we’ve received them.

If we don’t hear from you within the 28 days from the date of the letter, we’ll take this as confirmation you’re satisfied with the resolution and we’ll write to you again to let you know we’re closing your complaint.

Find out about our Consumer Complaints Code of Practice here. 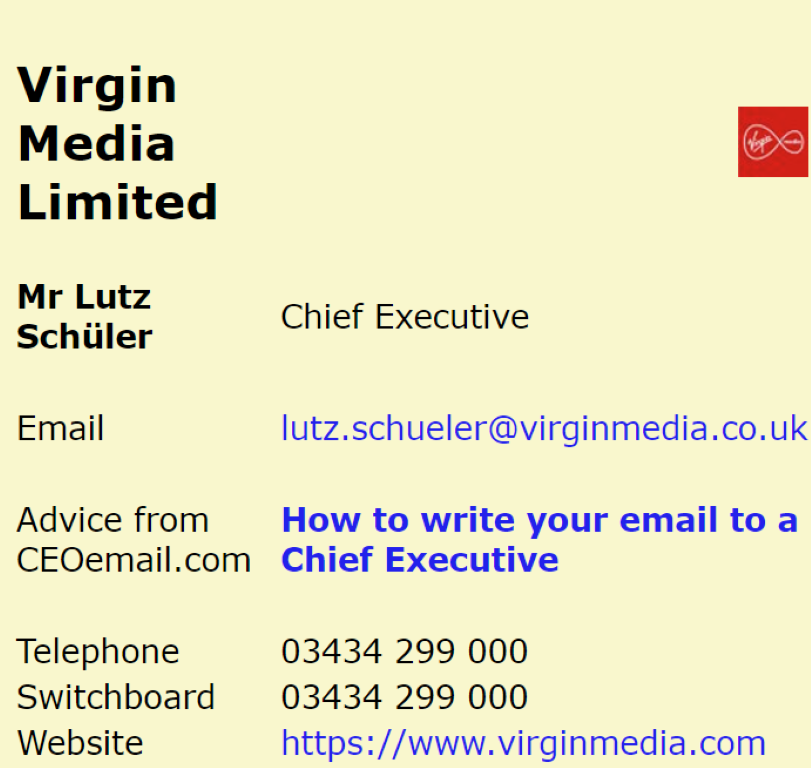